Easy Enrollment: Fill out the registration form on the Enrollment Tab 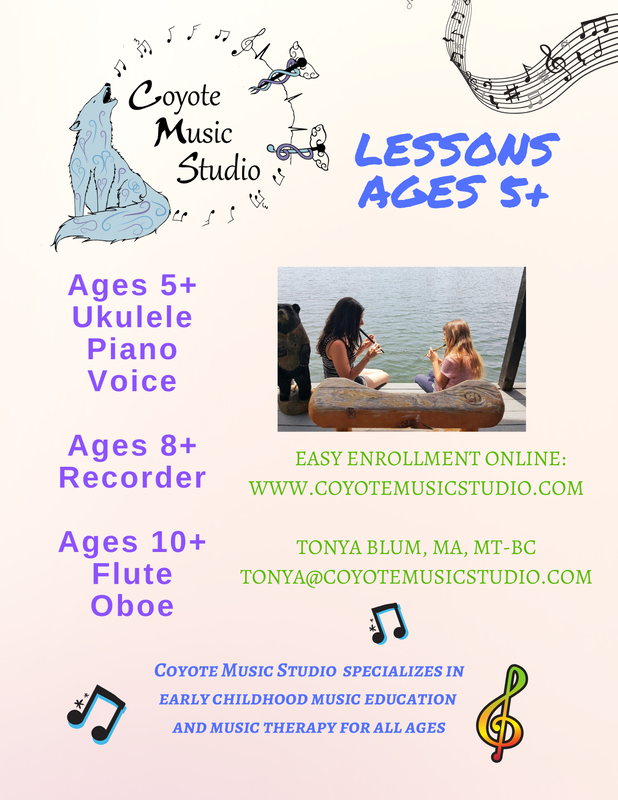 By appointment only
Private Lessons
$25/30min
10% Sibling Discount for every child after the 1st enrolled
10% Off Packages of 12 or more lessons
I'm a Board Certified Music Therapist and a certified Early Childhood-12th Grade Music Educator. I completed my Bachelor of Arts in Music-Flute from Henderson State University in Arkansas, studying under Shelley Martin and later received my Master of Arts in Music Therapy from Texas Woman’s University. While there, I  continued studying flute under Dr. Pam Youngblood and began learning guitar and autoharp as part of the program. I had the privilege of studying music therapy under the incredible Joseph Pinson, (also known locally by his stage name "Mr. Joe"), Dr. Nancy Hadsell, and Dr. Nicki Cohen. I also feel very privileged to have been one of Marta Sue Setliff's interns at the Denton State Supported Living Center (back when it was still called the Denton State School). In addition, there are many other music therapists in the North Texas area who have mentored or helped me along the way. If you are seeking music therapy services outside of my service area, feel free to contact me for a recommendation.

Growing up moving around the world with a mother in the Air Force, my refuge was always music and I found it was a great way to connect with new people. I began playing piano at 5 years old and flute at 11 but never imagined a career in music until I was a college freshman studying marine biology. It was then that a music therapy student introduced me to a career that could blend my love of research and musical skills in order to help people attain their personal goals. During my years in school, I also learned to play various instruments that might be used in music therapy (and just because playing music is fun!): guitar, ukulele, autoharp, mandolin, and mallet percussion. I like to incorporate music theory during music therapy sessions as well as traditional lessons since learning an instrument has been shown by  research to physically alter the brain and increase pathways in spatial reasoning, math, language, and emotions.

I enjoy performing and highly encourage my students to perform as much as possible. You never really know yourself as a musician until you have to recover from a mistake in front of a live audience. I mean...that was part of the performance! I performed regularly during my years studying flute at Henderson and music therapy at TWU. I've also performed in various venues around Denton and Dallas as the singer and songwriter for 2 bands: Synesthesia Battery and Choosey Beggar. I continue to perform as a solo artist. Check out my schedule and come see me play music outside the studio.